An inspirational true story of a Syrian refugee in Canada

What:    Film screening opened by motivational address highlighting Canada’s commitment to sponsorship and resettlement of refugees 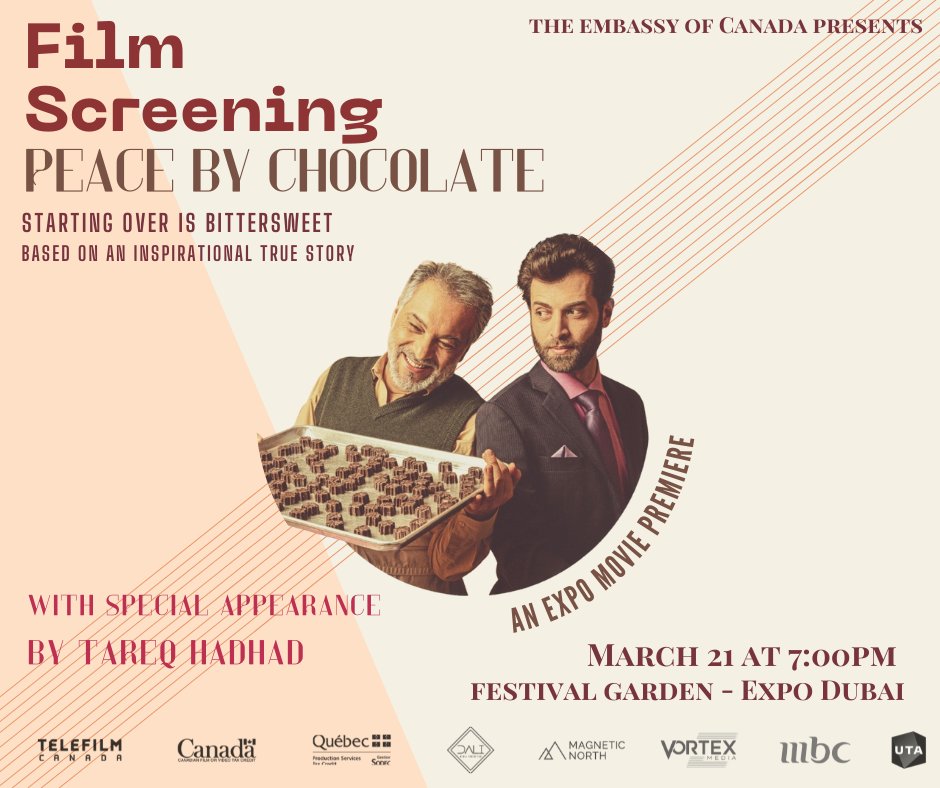 The Embassy of Canada to the United Arab Emirates, Immigration, Refugees and Citizenship Canada and in partnership with the Canada Pavilion, Telefilm Canada and the Global Refugee Sponsorship Initiative, will host the U.A.E. premiere of the film Peace by Chocolate on Monday, March 21, at Expo 2020 Dubai’s Festival Garden. The event will open with a keynote address by Tareq Hadhad, whose life story inspired the film. A Q&A session will take place after the screening with Mr. Hadhad and Chadi Dali, the film’s executive producer.

This premiere will highlight the importance of refugee sponsorship initiatives, which provide permanent resettlement to those in need of protection and bring economic and social benefits to receiving nations.

Starting at 7 pm, Tareq Hadhad will deliver a keynote address. Sometimes a story comes along that every person on earth should hear; the story of Mr. Hadhad and his family is one such.

The story of Tareq and his family is moving and powerful and one that everyone needs to hear. It has been shared on a world stage, in front of global leaders, including former U.S. president Barack Obama. Prime Minister Justin Trudeau shared the story at the UN in an effort to reshape how everyone there and around the world thought about immigrants and newcomers.

With this film event, Canada hopes to reshape and reframe how the audience views the value of refugees, shifting the narrative to one of burden to one of opportunity and potential.

Following Tareq’s keynote address, Peace by Chocolate, the movie based on the story of his family, will be screened. Directed by award-winning storyteller Jonathan Keijser, the movie tells a heartwarming true-life story resulting from Canada’s immigration policies. The movie stars beloved Syrian film star Hatem Ali and was his final feature film before his premature death in 2020. The film was executive produced by Chadi Dali, himself a Syrian Canadian.

Peace by Chocolate premiered at the Tribeca Film Festival and has won numerous prizes at the other festivals it has been shown at, including:

What people have said about the film:

“An absolute indie gem that premiered at Tribeca, Jonathan Keijser’s Peace by Chocolate warmed the cockles of my heart. Keijser’s writing and narrative techniques impress big time with their simplicity, apart from [the film’s] mature stand on politics in general.”
– Tusshar Sasi; Filmy Sasi

“When all of the serious dramas and urgent documentaries have faded from your mind, odds are Peace By Chocolate is going to be the film that you not only remember but revisit.”
– Steve Kopian; Unseen Films

“Though [the film’s] presentation is extremely polished, Jonathan Keijser and co-writer Abdul Malik admirably leave in the rough edges narratively regarding the sacrifices he has to make for the sake of the family.”
– Stephen Saito; The Moveable Fest

“It’s like Frank Capra came back from the dead to make a movie in Canada.”
– Michael O’Keefe; Letterboxd

“Jonathan Keijser and Abdul Malik’s screenplay about a refugee looking to accomplish his dreams is told as a drama-comedy hybrid. This dual tone takes a potentially heartbreaking yet inspiring story and gives it a different layer by adding humor, making it more watchable [for] the common viewer. The believability and amazing performances are also a tribute to the great directing.”
– Chris Salce; Film Threat

“Peace by Chocolate transcends the expected, sneaking up on you, guiding you toward emotional devastation and reconciliation.”
– Douglas Davidson; Elements of Madness

To confirm your presence or request interviews, please contact:

Canada at Expo 2020 Dubai
Canada’s Expo 2020 theme, The Future in Mind, serves as a platform to promote opportunities for trade, investment, education, tourism and immigration in Canada’s provinces, territories and cities and throughout all sectors of society. Canada’s participation highlights Canadian leadership in key sectors, including artificial intelligence, robotics, education, digitization, telemedicine, clean technology, agriculture, health sciences, aerospace and more. Canada’s approach to Expo 2020 Dubai is inspired by our core values of diversity, inclusion, human rights and gender equality as the foundations for a prosperous and inclusive nation.